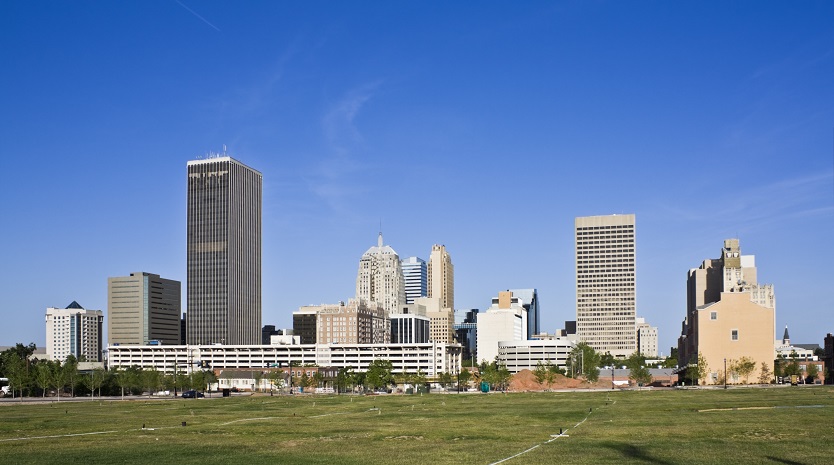 Oklahoma City began with a lot of 400 acres of land that was literally overrun overnight by over 5,000 hardworking men and women in mid-April of 1889. At the time, two up and coming townsite companies made a land claim, and with each making up their own map, the new residents had very different backgrounds and opinions.

The days after the land run led to a mass meeting on April 23 where a committee of citizens was chosen to reconcile the opposing outlines of the newest city in the old west. Ultimately, two wards were established, and voting took place to establish six counties in the region.

The Post Effects of World War II in Oklahoma City

The growth of the war industry brought Oklahoma City to the forefront as a major hub amid the national Interstate Highway System along with the inception of Tinker Air Force Base. The construction of Tinker itself introduced the city as a potential target for the Soviets' newly introduced nuclear weapon system.

Regardless of the past, the city progressed and grew. By the ’50s, almost a quarter of a million people called the city home. The boom of the oil and energy industry in the late ’20s and early ’30s changed the scene of the city.

By the ’50s, almost a quarter of a million people called the city home. The boom of the oil and energy industry in the late ’20s and early ’30s changed the scene of the city. As of the 2020 census, just over 650,000 residents live in OKC full-time.

Downtown Oklahoma City became a site known for the revolution in civil rights tactics in 1958. A progressive-minded teacher, Clara Luper, and a few students from Douglass High School held the first sit in at a local department store at a lunch counter. Their nonviolent movement in 1958 of just sitting spoke volumes and continues to make a statement to this day.

In 1964, Oklahoma City was subjected to an astonishing eight sonic booms per day in a government experiment known as the Oklahoma City sonic boom tests. While the intentions were to quantify the economic and sociological impact of the transport of supersonic aircraft, the tests ultimately were disastrous. It is heavily rumored that this Oklahoma City experiment contributed to the failure of one project the city was counting on — the Boeing 2707 SST.

Over the past few decades, our community has seen its fair share of tragedies along with victories. Today, Oklahoma City leads the state in its efforts to foster innovation in industries such as agriculture, aviation, health care, and manufacturing. But we mesh with one love and a passion for one thing: beef!

Here at Cattlemen’s, we strive to always move forward along with the dedicated citizens of Oklahoma City. We have expanded from what was a beloved local cafe to a fully fledged steakhouse. We opened our doors way back in the Stockyards in 1910 to feed hungry transients and locals.

The east side was also home to two meat processors to keep the masses fed, but around 1945, the Cattlemen’s Cafe was acquired by Gene Wade. This little venture on his behalf was brought about by the luck of one roll of the dice at the Old Biltmore Motel against the innovator Hank Frey, and today, we proudly ride under the name Cattlemen's Steakhouse.

Come One, Come All to Cattlemen’s Steakhouse

Movie stars, politicians, and steak lovers from around the world come to the Cattlemen’s Steakhouse when they are in the Oklahoma City area. Between our fascinating history, perfectly aged steaks, top-notch breakfasts, and stellar coffee, you have it made here in the Stockyards. While it’s always great for you to just stop by, to get the best seats in the house, book a reservation online at Cattlemen's Steakhouse or call us at 405-236-0416.