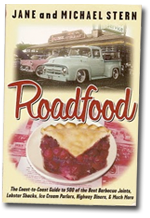 A steak at Cattlemen's is magnificent to see, alone on its white crockery plate, higher in the center than around the rim, surrounded by a puddle of its own translucent juices seeping from within.

"If y'all would cut into your steaks," the waitress says when she sets the plates on the unclothed dinner table, "we'll see if they're done just the way you like them."

To carve the steaks, Cattlemen's provides each customer a wood-handled knife with a serrated blade. The blade eases through the meat crust and down into it's warm red center – medium rare, as requested. You don't really need the sharp edge – a butter knife would do the job – but it sure is mouthwatering to feel the keen steel glide through beef that, although tender, has real substance. In contrast, a filet mignon, however sumptuous, seems wan. This is beef with corn-fed character.

On the side come French fries and big-topped yeast rolls, both of which are great to push through the meat's juices. Who cares that baked potatoes are accompanied by bright yellow globes of mediocre margarine instead of butter? So what if the dinner salad is little more than iceberg lettuce with thick white dressing? When one is in the company of this steak's greatness, secondary culinary issues dwindle to nothingness.

In addition to cuts of seared beef, Cattlemen's is a good place to eat such local favorites as Rocky Mountain oysters (fried testicles, served with cocktail sauce for dipping) and chicken-fried steak. Arriving in a spill of white cream gravy, the chicken-fry is an inherently lowly cut of beef, sounded tender but still fibrous. Its charm, for those who relish it, is the way its plebeian personality endures, and yet somehow the eating experience is transcendent. The only problem with Cattlemen's version is that no mashed potatoes are available... a grievious omission.

Finally, be aware of breakfast at Cattlemen's – a special time to come to this place in the old stockyards. Starting at six in the morning, the counter is home to genuine cowboys and the truck drivers who are cowboys' spiritual heirs, and it is an opportunity to start the day right western-style, from a menu that features breakfast steaks and platters of brains and eggs.

(adapted from "Roadfood" by Jane and Michael Stern)